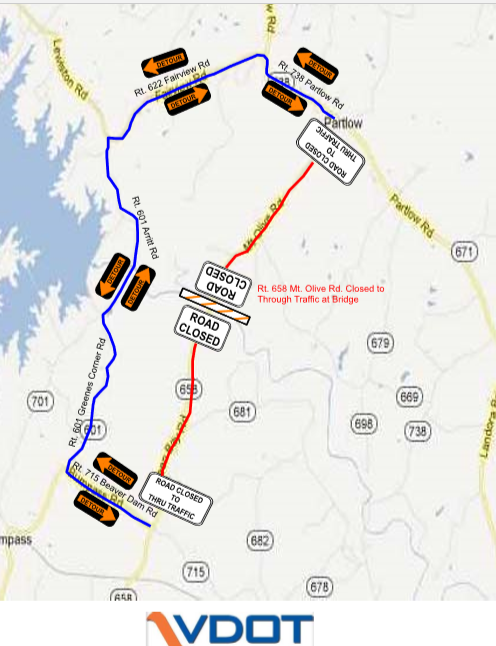 March 7, 2019 Linda Farneth - Creative Lindations Commuter Traffic, Uncategorized Leave a comment
ROUTE 658 (MOUNT OLIVE ROAD) IN SPOTSYLVANIA
WILL REMAIN CLOSED UNTIL SUMMER 2019
Construction will continue, to build a replacement bridge over the North Anna River.
If you were anticipating traveling over the North Anna River by way of Mount Olive Road this Spring, you’ll have to wait a little longer.
Route 658 (Mount Olive Road) in Spotsylvania County will remain closed to through traffic at the North Anna River until summer 2019.
The 2.8 million dollar project was a result of structural issues that were discovered by VDOT in early 2015.
The Virginia Department of Transportation (VDOT) closed Mount Olive Road in March 2015 for motorist safety after a routine bridge inspection found cracking in key support elements.
The project is being funded with State of Good Repair Funds, which are targeted at improving or replacing structurally deficient bridges across the state.
Originally the project was scheduled to be completed by December 20, 2018 but due to weather and other factors the bridge is slated to be complete in the summer of 2019 weather permitting.
Once construction of the new bridge is closer to completion, a specific opening date will be announced.
Crews will continue construction to build a replacement bridge over the river, which will restore a connection between Spotsylvania County and Hanover County.
The bridge deck width is being expanded from 13 feet to 21.8 feet wide. The structure has been engineered to withstand increased water pressure that occurs when water flows into the river from the opening of the North Anna dam, which assists with cooling at the North Anna Power Station.
Approximately 580 vehicles a day crossed the bridge when it was open, according to a 2015 VDOT traffic count.
The current detour route will remain in place until the new bridge opens.

Southbound motorists traveling from Spotsylvania County should use the following detour route:

Northbound motorists traveling from Hanover County should use the following detour route: