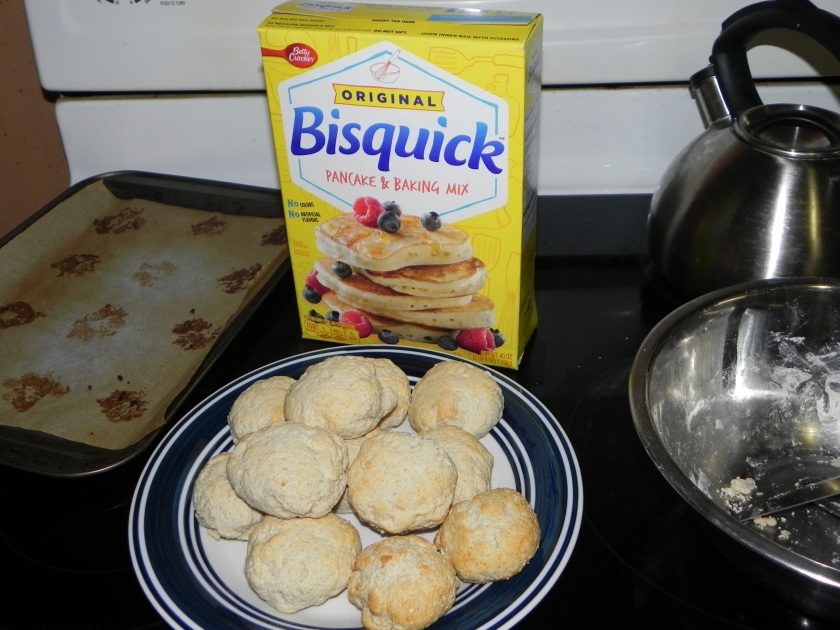 I decided to try Bisquick’s recipe for biscuits. I’m a Jiffy Baking Mix person myself but with the resent events finding Jiffy is proving to be pretty difficult. Actually it was hard to find it before, I guess I’m not the only one who loves it, but now more than ever it’s damn near impossible to get your hands on a box of Jiffy. That goes for the big box and the small specialty boxes.

So when I was forced to go with Bisquick I bought it. I will admit, it has been sitting on my shelf for a couple of weeks. I did not make the cookies I was planning to make, nor have I made Chicken and Dumplings in a while. I just don’t like the chewy dumplings and only Jiffy creates the light and fluffy airy delightful dumplings I’ve grown up with. But enough about Jiffy, you’d think I own stock in it. No I don’t and no they did not sponsor this blog. But if they want to give me a check I’ll be happy to accept it and drone on and on about how good their product is.

So I have never actually made biscuits from scratch. At least if I did it was a total disaster that I have purged from my memory buffers. (Can you tell I’m a sci-fi fan)

But I was willing to try these biscuits for a number of reasons. For one thing, they’re easy, like super duper easy. Just flour and milk! So what do I do? Yep you guessed it, my first ever attempt at making biscuits I had to personalize them. So The recipe calls for two and a “half” cups of baking mix. Me I’m lazy so I just topped off my standard 2-cup glass measuring cup. (close enough for government work!)

Before I added in the 2/3 cup milk I got an idea. I know, Uh Oh! Well just wait. I added in two tablespoon of sugar, a sprinkle (I never measure added ingredients *) of pumpkin pie spice and a sprinkle of cinnamon. I stirred the dry ingredients really well then added the milk. I stirred forming a light dough then ditched the spoon and washed my hands. I got in the bowl and mixed that dough the “right” way.

I then lined a baking sheet with parchment paper. That’s another reason I decided to make biscuits, I’ve never used parchment paper and wanted to try it.

The directions say to drop the dough onto an un-greased cookie sheet. Nope I didn’t spoon and drop, I shaped them into little balls then flattened them slightly. I laid them out on the parchment paper and popped them in the oven on 450 F. The directions said 8 to 10 minutes. I found 9 to be the magic number for my oven.

Well let me tell you. I was never so proud of myself.

You see what I didn’t tell you at first is that I particularly hate homemade drop biscuits. I’ve always found them to be dry and too crumbly. But I really liked these. I had two with butter and grape jelly and loved them. I confess I went back for a third, which I ate without any added ingredients and it was still good.

Unfortunately I didn’t think to take photos of the mixing and placing but I did get a good shot of them after baking. 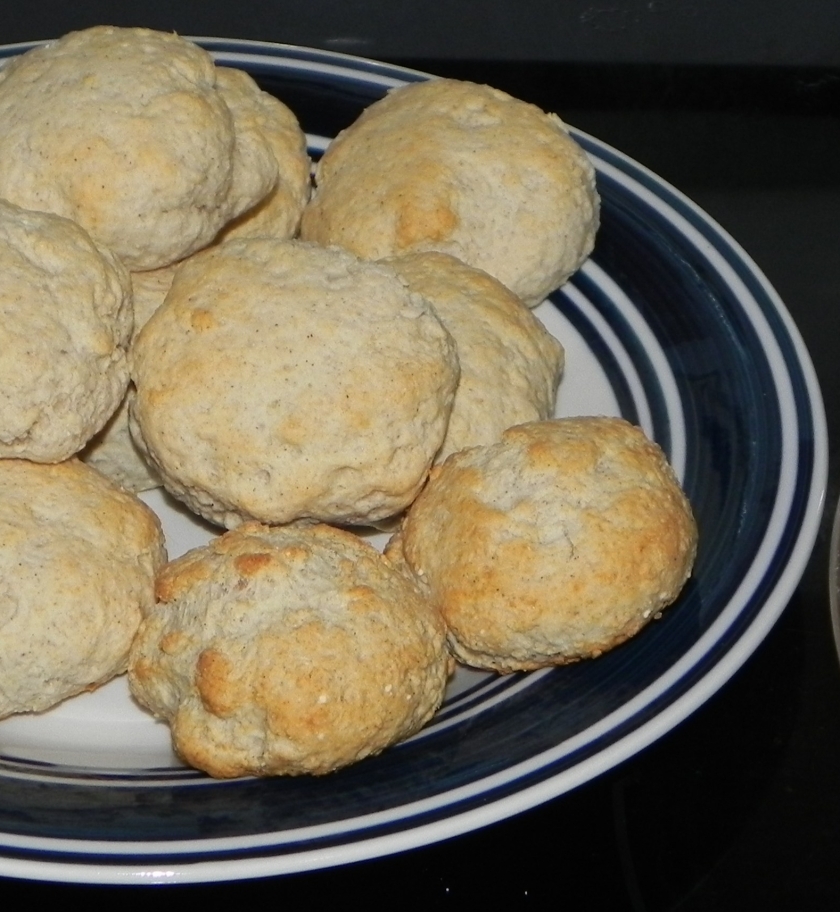 Never be afraid to try something new in the world of cooking or baking. But one piece of advice, if you’re going to experiment on a grand scale, save it for when you’re cooking for yourself or the pizza place is open just in case it doesn’t turn out edible!

*If I had to give a amount the pumpkin pie spice and cinnamon were about a half teaspoon of each.